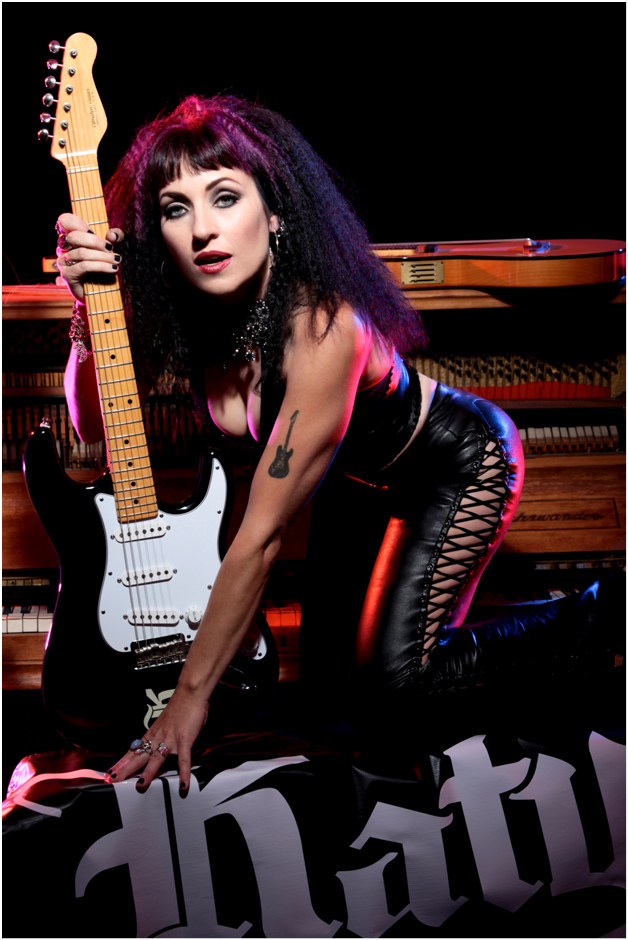 KATYA’s song “Hey Sister” was featured in the finale of the ABC hit series “Reef Break” starring Poppy Montgomery. Her music video, “Laying In My Bed” was licensed out to, and used for the opening sequence of the MTV show, “Damage Control.”

KATYA has toured Japan eight times. She performed at the Hard Rock Cafe Osaka, Hard Rock Cafe Universal City Walk Osaka, Tokyo and the Kansai Music Conference. The Kansai Music Conference nominated KATYA for the “Hiram Bullock Award” and the “Performer of the Year Award”. KATYA opened for Queensryche in Detroit, MI. She was invited to play the world-famous Venice Boardwalk Carnevale Festival, where her performance drew comparisons to 70’s Rock Icons. She rocked the Inkslinger’s Ball at Angel Stadium of Anaheim. Later, KATYA headlined at the E World Music red carpet launch party at the Knitting Factory.

The LA Music Awards nominated KATYA for “Female-Singer Songwriter of the Year”. Her self-produced/written, debut album, “ROCK LIVES!” consists of internationally known guest stars: David Campbell, Stephen Perkins (Jane’s Addiction), Gonzo Sandoval (Armored Saint), Jerry Peterson (Eric Clapton), Adam Cohen (Ray Charles), Paulo Gustavo (Graham Bonnet), John Philip Shenale (Tori Amos) and Eliza James (Burt Bacharach). The album was mixed by Skip Saylor/Ian Blanch and mastered by Bernie Grundman. Her single, “The Power of Rock and Roll,” (featuring Gonzo on drums of Armored Saint) has broken into international radio. KATYA is a featured artist in the bestselling Musicians Atlas Resource Book, and spotlighted on the “musiciansatlas.com” homepage. Planetary Group has distributed the compilation CD to more than 750 radio stations in the United States and Canada; this CD features KATYA’s song, “The Power of Rock and Roll.” Katya signed a distribution deal with Music One in the Philippines, and received international airplay. She was chosen out of 300 performers by Chris Douridas and Gemma Dempsey in Los Angeles for an internationally released compilation CD called “2623 Main Street.” Her song, “Bitch & Moan,” which was aired on KLOS. Her video “Laying In My Bed” was placed on Mike Galaxy’s compilation DVD, “Can’t Dance Version 3”, which was screened and distributed at the Sundance Film Festival.

KATYA’S BOOK “How To Calm And Tame Your Dog Naturally!”

KATYA’s book, “How To Calm And Tame Your Dog Naturally!” and her flashy, hand-made clothing, pet gear, and accessory line ROCK WEAR FOR DOGS (& humans too!) will be in a chain of well-known pet stores. Her established online store has provided her with the ability to expand into retail storefronts.

Her roots are Russian and her music is revolutionary. KATYA’s music career started at the early age of 5, when her grandmother insisted on giving her classical piano and voice lessons. She was born in Ossa, Russia and was a trained classical pianist and singer. At age six, KATYA’s interests expanded to the guitar, which led her to be a songwriter. The keys to the golden kingdom were granted, and KATYA’s whole world became about music. Today she is an accomplished musician playing piano, keyboard, rhythm, and lead guitar as well as being an incredible vocalist and a high-energy performer. Connect with this amazing artist and experience her transforming and extraordinary music!